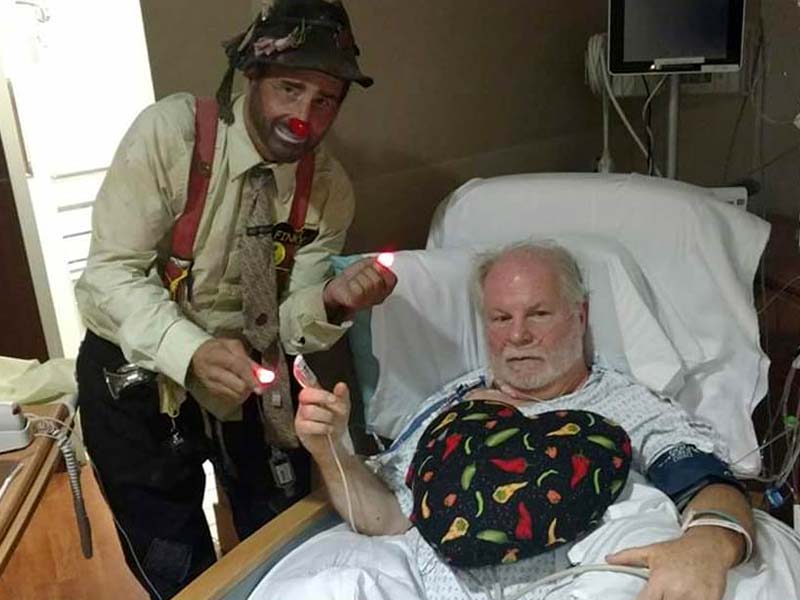 As a business owner; Past Potentate, Shrine Circus and Rodeo Chairman, LuLu Shrine; and incoming Junior Warden, Lodge No. 2, Philadelphia, Brother Doug “Finky” Fink (above, left) isn’t afraid of a little hard work. But his true calling is one of the hardest of all.

“My job is to make people laugh,” he said – not referring to his ambassadorship with the Masonic Blood+Organ Donor Program, a newer addition to his workload, but his involvement with the Shrine’s clown unit, which goes into the Philadelphia campus of the Shriners Hospital for Children.

Twenty-six years ago, Brother Doug joined LuLu Shrine in Plymouth Meeting. On his first day as Finky the Clown, he had an unforgettable “moment” with a patient. As soon as he walked in, a young girl who had no arms called over to him.

“She said ‘Hey, Finky, come over here and read to me,’” he said. Brother Doug spent two hours with the girl; she later gave him a picture she had drawn with her feet of the two of them together.

Besides his increased involvement in clowning, Brother Doug also served as the Shrine’s Circus and Rodeo Chairman – all while attending his lodge’s stated meetings and events and managing the logistics of his window-cleaning business. Juggling (sometimes literally) so much, it’s no surprise that Brother Doug often felt a little run-down. In fact, he was experiencing extreme fatigue, but believed this was normal. Because of a family history of cancer, Brother Doug scheduled regular doctor’s visits every four months. During one checkup, he heard something from his doctor that he had never heard before: “I don’t like the numbers; it doesn’t look good.”

Brother Doug’s doctor encouraged him to see a nephrologist (kidney specialist) and get a biopsy. Around 99% of people have some kind of reaction to this procedure, but he had a troubling response: hemorrhaging blood and intense pain.

“I thought I was going to die,” he said.

“They said ‘Your numbers are going down so fast that in three months, you’ll be on dialysis. You’re going to need a kidney transplant.’”

Fortunately, with regular doctor’s appointments, blood work, and nettle tea, Brother Doug was able to stabilize his creatin level and stay off dialysis. During all of this, Brother Doug received a letter that he was a candidate for a transplant.

“I thought ‘I don’t know if I’m supposed to be happy about this – they’re celebrating me being sick,’” he said.

Regardless of his own feelings about it, Brother Doug had numerous people offering to be his living donor. His identical twin brother (Brother Don Fink, also a member of Lodge No. 2) would have been a perfect match, but was unable to donate because he was diabetic. His brother-in-law was also a match, but was again unable to donate after the doctors discovered he had pancreatic cancer during his screening physical.

“There’s a reason why I needed a kidney transplant – to help certain people,” Brother Doug said, citing that story and others of friends who underwent the preliminary screening and, instead of learning that they could be a donor, discovered previously-undetected health issues during the process. His friend Anthony wanted to give his kidney, but couldn’t, so his wife, Eileen, offered to instead. She wasn’t a match, but they were able to do a kidney “swap.” Eileen sent her kidney to Texas and Brother Doug received a living-donor kidney from Georgia.

On April 18, 2016, Brother Doug and his wife, Kim, went to the hospital for his transplant. When he woke up from the surgery, he opened his eyes to see all his fellow Shriner clowns around his bedside – support from the Masonic brotherhood when he needed it most.

Regulations dictate that hospitals are not allowed to provide recipients with information about their donor without permission, so Brother Doug didn’t know much about the source of his kidney. But, eight months after his transplant, he received a letter forwarded from the hospital in Georgia where his kidney had been sourced. It was from his donor, a woman named Julie. Brother Doug wrote back thanking her for the lifesaving gift and telling her about his volunteer work as a Shriner clown. His letter went unanswered.

On the first anniversary of his transplant, he was out celebrating with a friend who had gotten his triple bypass at the same time as Brother Doug’s kidney, and received a text from an unknown number. It was Julie! The two were able to meet in person when Julie and her family were passing through Pennsylvania on their way to New York, and Brother Doug invited them to a Shrine dinner he was speaking at. They were both able to share their stories during the event.

Brother Doug also feels his transplant journey has given him a better understand of what the Shriners Hospital patients go through.

“I know how those kids feel,” he said.

Besides empathizing further with the children receiving treatment at the Philly Shriners Hospital, Brother Doug is sharing his story as part of the Masonic Blood+Organ Donor’s ambassador program. Brother Bill Soloway and Brother Doug had gotten their transplants six to eight months apart from one another, and Brother Bill was the first person that he had ever met who had received a lifesaving organ. Bill asked him about being an ambassador for the program, and Brother Doug accepted.

“I asked him what to do, and he said ‘Just hand out your cards,’” he said.

All the program ambassadors have custom-made business cards with their contact information so that transplant recipients, donors and families can reach them. Brother Doug’s has a picture with him in clown makeup and the words “Organ donation is no laughing matter, but thanks to my lifesaving kidney transplant, I can clown about it. Please be an organ donor!”

“It saved my life. I had 4% kidney function right before my transplant. I probably would have died on the street. Now I’m able to do my work making children happy,” he said.

If you have not previously registered as an organ donor on your Pennsylvania driver’s license, please consider doing so by visiting the Donate Life PA website. Visit the Masonic Blood+Organ Donor Program online for additional resources and information.