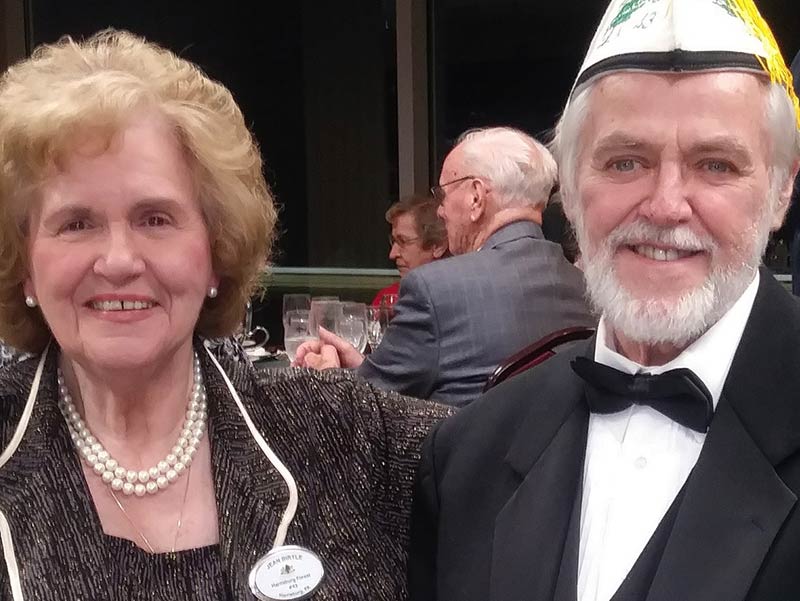 Imagine, you have a failing liver and don’t know what to do.

The good news: According to your place on the organ transplant list, you’ll have a new liver in about six and a half years.

The bad news: Your life expectancy is five.

In 2016, this was Bill Birtle’s dire situation. He and his wife, Jean, were racing against the clock, were simply losing hope and did not know where to turn. That was, until they found the Masonic Blood+Organ Donor Program.

“It’s pretty devastating when someone says you’re going to die,” Bill said. “We sat down, we whined, we cried, then we said, ‘We better go find a liver.’”

The Birtles’ time was spent researching other hospitals to consider Bill’s transplant. In the meantime, an excessive concentration of ammonia in Bill’s blood, caused by his failing liver, affected his memory and ability to concentrate.

“He got lost coming home from work,” Jean recalled. “His business was two miles from our home.”

At his lowest point, Bill had a birthday party with 35 people in attendance. The next day, he didn’t remember it.

Then came a saving grace.

“Bill came running in the room with ‘The Pennsylvania Freemason’ magazine and said, ‘Look, the Masons have a program for organ transplants,’” Jean recalled. “We couldn’t get on the phone fast enough.”

After one call, Bill was connected to Bill Soloway, an organ donor ambassador for the Masonic Blood+Organ Donor Program.

“He had more answers than we had questions about the process,” Bill recalled. Bill Soloway recommended right away that the Birtles receive a consultation at Penn Medicine in Philadelphia, where he himself had received a heart transplant.

In routine testing, cancer was discovered in Bill’s liver. Fortunately, it was treatable, and shortly after, he received a new liver.

“Bill [Soloway] was our advocate,” Jean said. “He was with us through 6:30 a.m. doctor visits, ER admissions and sleepless nights. We weren’t used to the city. He made accommodations for us and showed us where to go in the hospital.”

At one point during his illness, Bill Birtle had lost 70 pounds and had more than 20 doctors. Jean had spent more than 50 days at the Gift of Life Family House in Philadelphia, which Bill Soloway arranged.

Unfortunately, when the Birtles thought they were “finally out of the woods,” it was discovered Bill’s transplant had damaged his kidneys beyond repair. The brutal cycle of dialysis and more hospitalizations began.

“The doctor told us I’d probably never get a kidney,” Bill said. “She said I wasn’t healthy enough. It was like starting all over for us.”

Without hesitation, Bill Soloway was there for the Birtles for round two.

“He said to the doctor, ‘Please write down what the Birtles need to do to get a kidney,” Jean recalled.

Six months later, everything on the list was complete, and Bill Birtle received his kidney. “Bill [Soloway] was there through the good times and the not-so-good times with a smile on his face,” Bill Birtle said. “He never asked for food or travel expenses, and I’m sure the list was incredibly long.”

“Every person in need of an organ transplant needs an advocate like Bill,” Jean said. “Most of these people are sick. They aren’t in the right frame of mind. Doctors who put you on ‘the list’ decide the direction of your life. If you don’t ask the right questions, they won’t give you answers, and you won’t progress.”

One Christmas, before Bill’s liver transplant, the Birtles invited friends over for a meal. While Bill was ill at the time and doesn’t remember much from the event, he does recall the way his friends cautiously said, “Goodbye, we love you,” as they walked out of his home.

This past Christmas, with his health stabilized, Bill had new hope and the Masonic Blood+Organ Donor Program to thank.

“Bill [Soloway] was my guardian angel,” he said.